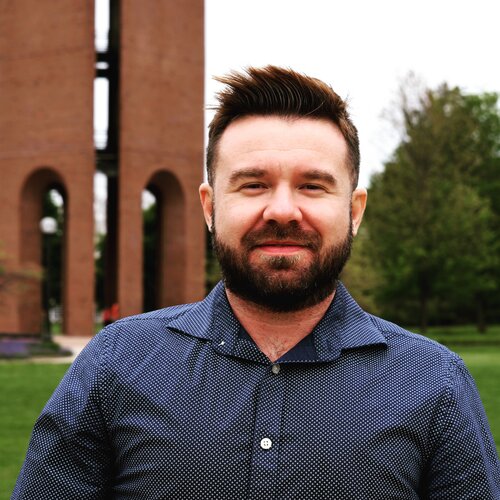 Caio was born in Caçapava, São Paulo, Brazil where he earned his first degree in Portuguese Linguistics & Literature from Universidade Paulista. Prior to his studies at UIUC, he completed a teaching assistantship at Washington and Lee University in Virginia through a grant from the Fulbright Program that also supported introductory courses in Hispanic Linguistics, Cognition, American Politics, French, and Foreign Languages Teaching Methodology.

Caio has more than ten years of professional experience in the classroom. He has taught English, Spanish, and Portuguese as foreign languages in Brazil, Uruguay, Colombia, and the US. He has also worked with school systems throughout Brazil to implement bilingual educational programs across different levels and subjects.

In the adjacent cities of Rivera (Northern Uruguay) and Santana do Livramento (Southern Brazil), the major contact between Spanish and Portuguese not only creates a whole new variety of Portuguese known as portuñol, fronteiriço, or DPU1, but also provokes the mutual influence of the local official languages i.e., Spanish and Portuguese. This study aims to answer the following questions: as for the intervocalic voiced bilabial occlusive realizations, is the Spanish of Rivera influenced by Portuguese? Conversely, is the Portuguese of Rivera influenced by Spanish? How different are they from the realizations of their monolingual counterparts in Porto Alegre and Montevideo? Are those differences statistically significant?

This study is based on the Typological Primacy Model (TPM, Rothman, 2011) and the Linguistic Proximity Model (LPM, Westergaard, 2021) for transfer in L3 Acquisition (L3A). The main similarity between these two models is the deterministic role of linguistic similarity in L3 transfer. The main difference is that the TPM claims that the whole linguistic system from either the L1 or L2 is transferred; on the other hand, the LPM posits that transfer happens in a property-by-property basis. This study aims to contribute to this discussion by investigating what drives transfer in L3A: global structure similarity or specific property similarity? Does that deterministic factor change over time? The second question is motivated by the fact that most of the research in L3A has examined transfer at the initial stage of acquisition. The language triad for this study is Portuguese as L1, English as L2, and Spanish as L3 in Brazil. Two linguistic factors are probed: the realization of voiced occlusives /b, d, g/ in intervocalic position and the realization of R in word-initial position /ɻ, r̄, h/.

Spanish and Portuguese in contact: the Bolivian community in São Paulo

São Paulo is the biggest and most important city in Brazil. It is home not only for paulistanos, but also for many thousands of migrants that for different reasons move there for better life conditions. Bolivians became the largest community of immigrants in São Paulo in 2020. In Bolivia, the contact between Quechua/Aymara and Spanish seems to have impacted the realization and interpretation of some Spanish language features. For example, Escobar and Crespo (2020) found that Quechua subjectivity is transferred to Andean Spanish in Peru, Bolivia, and Ecuador through the use of the Present Perfect. Semantic transfers like this can also impact how Spanish, Quechua, and Portuguese all interact in the trilingual community of Bolivians in São Paulo. This research aims to analyze the interaction between these languages in São Paulo both at the sociolinguistic and acquisitional levels.