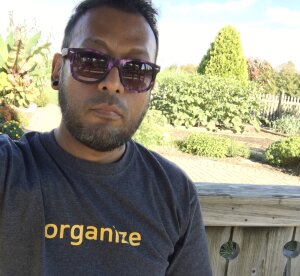 I was born in El Salvador, I am guanaco (https://www.elsalvadormipais.com/por-que-nos-dicen-guanacos), in a town called Zacatecoluca, I am viroleño (http://lexicoon.org/es/viroleno) as well. My life in the U.S. is the result of the civil war in my country of origin. Therefore, I have spent most of my adult life in the U.S. and I see a clear division in my life, a before and an after. The before, I lived it in El Salvador, where I had my formative years during my childhood and adolescence. These years provided the family support and the strict education of a centralized system. The after, is still taking place, as my life is always in a state of constant change. In the U.S. adulthood happened.

In the process of immersion and assimilation to a new culture and language, unconsciously I created a breach between my own culture and myself. I stayed away from anything related to Latin America, I got lost in the culture of the U.S., and in some way, I was conditioned to be ashamed of who I was: an immigrant.

From this estrangement, I deemed necessary a conscientious change. I started the M.A. program at UIUC and discovered a whole new world, a world that in reality was not new. It was always there, the only thing that I needed was literature. Literature from the Spanish speaking world, especially from Latin America, where the structures of power, foreign domination, national identity, sexual identity are examined and questioned.

I did obtain an M.A. in French Studies, and I am glad that I did not go further in the French literature field. I am glad, however, that I speak and know the language and some of its canonical works.